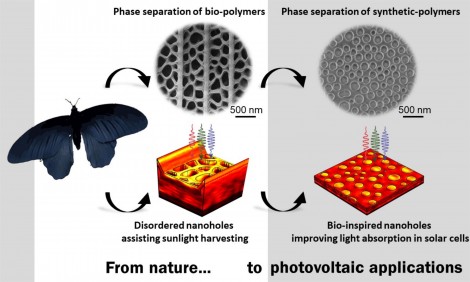 The innovative design hinges on the patterning of the photovoltaic thin-film absorbing layer, which is laced with disordered nanoholes. Conceptualized after the black butterfly’s wings, those nanoholes are responsible for a better collection of sunlight, and a better absorption of the collected photons. “In our paper, we focused on hydrogenated amorphous silicon as the thin-film absorbing layer,” says Dr Guillaume Gomard, nanophotonics group leader in the Institute of Microstructure Technology and Light Technology Institute at KIT. However, he notes that the new method can be applied to different types of absorbers, such as ultra-thin crystalline silicon, perovskite, etc.

From the wings of the pachliopta aristolochiae to silicon thin-film

“Just like the structures found in the black butterfly wings, our design involves nanoholes with varying diameters and arranged in a disordered way,” Gomard explains. There are neither symmetry elements nor a repeating unit. There is, nevertheless, characteristic distance between the nanoholes. “This disordered configuration enables [the device] to efficiently harvest the light over a broad spectral range, which is relevant for photovoltaics where wavelengths between 300 nm and up to 1200 nm should be absorbed, and for a broad range of incidence angles.” This, he says, constitutes the main difference compared with periodic configurations, which are usually optimized for a restricted wavelength range and less tolerant to a change of the incidence angle.

“Interestingly, we could not only reproduce these nanostructures but also take inspiration from the way they are generated by the black butterfly,” Gomard notes. “Thus, we have developed a self-assembly technique, driven by the phase separation of polymers in order to apply our disordered nanostructures over large areas.”

The expert summarizes that his team’s design exploits the unique optical properties of disordered arrangements and can be readily scaled. 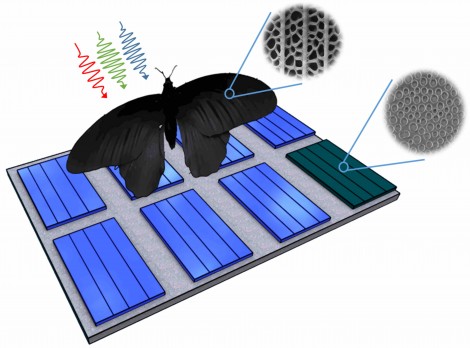 Impact on the design of the next generation of solar cells

Gomard points out that while crystalline silicon (c-Si) solar cells are still largely dominating the photovoltaic market, thin-film solar cells — so-called second-generation photovoltaics — are very relevant because they possess properties that regular c-Si solar cells do not have, such as being lightweight, being directly processable over a large-area, low material consumption, and they can be flexible and easily integrated in bags or clothes, etc. “Our approach targets these thin-film solar cells and aims to improve their efficiency, which is usually lower than that of c-Si cells based on thick absorbers,” he says, adding that ultimately, they want to combine those aforementioned properties of thin-film solar cells with high power conversion efficiencies.

Thus far, Gomard and his colleagues have demonstrated the optical benefits of the new solar cell design. He says, “We would like to extend this demonstration to the resulting power conversion efficiency of the solar cells, and also to test different types of photovoltaic absorbers to show the universality of our method.”

The researcher references the 2015 Nature Communications paper “The role of random nanostructures for the omnidirectional anti-reflection properties of the glasswing butterfly,” which demonstrating the exceptional anti-reflection properties of glasswing butterflies, the 2016 Advanced Optical Materials paper "Flower Power: Exploiting Plants' Epidermal Structures for Enhanced Light Harvesting in Thinâ€Film Solar Cells,” which reported on the potential of plant epidermal cells for light harvesting, and now the efficient absorbers based on the black butterfly nanostructures, and concludes: “We think that nature-inspired solutions still have a lot to offer to the field of photovoltaics, so our team will keep looking for more interesting species to analyze.”